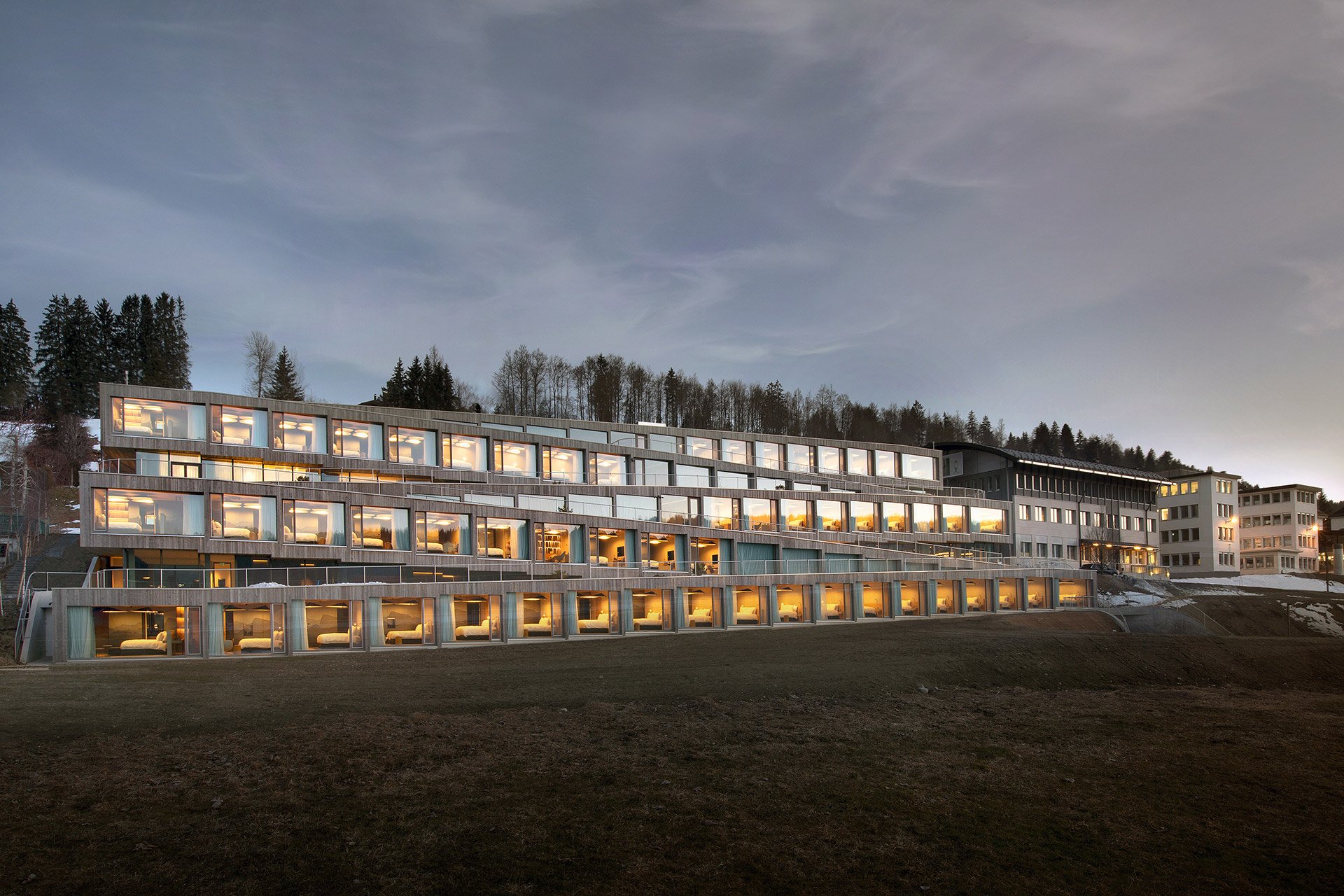 High-end fashion brands expressing themselves through outrageously lush, edgy hotels are nothing new. From Bulgari hotels in cities like London and Milan to Palazzo Versace on the Gold Coast, it seems the trend for designer brands to dig deeper into hospitality is only accelerating. However, it is not until now that a luxury watchmaker has attempted to play the same game. And that is exactly what we have here, with the brand new and truly impressive Audemars Piguet Hotel des Horlogers, completed by Bjarke Ingels Group (BIG) at the watchmaker’s headquarters in Le Brassus, Vallée de Joux, Switzerland.

Announced a few years ago, the Audemars Piguet Hotel des Horlogers has proven to be a striking 50-room property where every guest enjoys sweeping views of the vast valley, located in the Swiss canton of Vaud, just exterior of Geneva. The location is of great historical importance to the Swiss watch industry, but the setting was also chosen because it is the same location as BIG’s other ambitious project for the historic watchmaker – the spiral-shaped museum Audemars Piguet Workshop Museum.

The design of the hotel was guided by the strict Swiss Minergie-ECO certification, offering eco-friendly accommodation right next to the aforementioned museum. The eye-catching zigzag shape of the Hotel des Horlogers rooms and suites was designed to reflect the topography of the region, built as a series of ridges gently descending to the valley floor with major spaces connected within by a passage that runs the length of the building to connect the five floors.

RELATED: Six Senses Svart In Norway is the most amazing hotel you have ever seen

The BIG briefing focused on minimizing energy consumption and waste. According to the testimonies of those who have already passed through the hotel, hot water and heating are provided by a local wood heating network with 126 photovoltaic panels and helped by the recycling of any bio-waste. The absence of plastic is an evident feature throughout the hotel, compromising everything from in-room amenities such as biodegradable slippers to an on-site spa that offers 100% Swiss-made Alpeor products with eco-friendly bottles and formulas. based on plants and flowers from the Vallée de Joux.

Local stone and wood have been used throughout the hotel to create a rather soft and natural palette. The lobby would have a similar style, mixing local spruce surfaces and seamless concrete while drawing some personality from the overhanging whitewashed trees, an edgy reference to the nearby Risoud Forest. The hotel’s common areas include a library filled with books devoted to the history of watchmaking, which, combined with watch tours for guests, should fully immerse watch enthusiasts in the industry while enjoying luxury. absolute from the Hôtel des Horlogers.

For those who love to drink and dine, the hotel’s main social hub is a bar offering Swiss-made beers and spirits, distinguished by specific fixtures that have been installed to reflect the large rock formations that dot the valley. . The hotel’s two restaurants, Le Gogant and Le Table de Horlogers, are helmed by three-Michelin-star French chef Emmanuel Renaut, and base nearly the entire menu on local ingredients.

Of course, these aforementioned watch tours should be considered non-negotiable for guests wishing to stay a few nights at the Audemars Piguet Hotel des Horlogers. You won’t just visit AP, but also nearby manufacturers such as Jaeger-LeCoultre – a reminder that this hotel is more of a showcase for the whole region and its pioneers, rather than a single watchmaker.