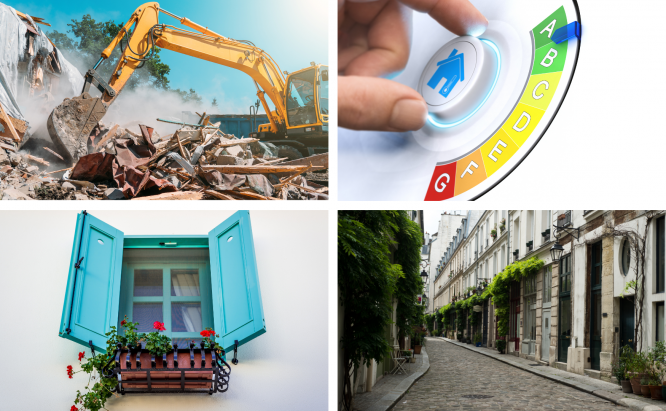 Five updates for owners in France

A town hall in Oise asked a local resident who had just repainted his shutters to change the color, because the turquoise color they had chosen went against the town Local Urban Plan (development plan).

Stéphane Fitère from Vieux-Moulin told Le Parisien: “I got planning permission to build the house and I didn’t think I would also need permission to change the color of the shutters!”.

He receives seven letters from the town hall and others from the local community of municipalities, as well as an architect from the Buildings of France. One of the letters said the case would be handed over to a prosecutor if he didn’t change the flaps.

The architects of the Bâtiments de France are experts in the conservation of French architectural heritage, who must be consulted during work projects on or near listed buildings.

Mr. Fitère’s house is located next to a church and it is for this reason that the Bâtiments de France intervened because they have the power to decide on the color of the shutters.

However, the town hall currently allows Mr. Fitère to choose the color from a specific palette which varies according to the type of building.

“My house could be described as a forest lodge, a farm and a property in the soissonnais style… It ticks several boxes in the architectural recommendations document for the Compiègne region,” said Mr. Fitère, adding that the shade he chose is one of those recommended.

He said he wouldn’t change his shutters.

French law states that each region has specific color requirements. In addition, any modification to the exterior appearance of a building is subject to prior declaration of work (prior approval).

When the work involves repainting shutters the same color, no authorization is required.

This does not apply if the color needs to be changed.

In addition, if the house is near a historic monument, a heritage site or in a national park, the Buildings of France must be consulted.

In condominiumseach apartment must have shutters of the same color to avoid conflicts.

More than 80% of Parisians could not buy a 50m² apartment

More than 82% of Parisians would not have the means to afford a 50m² apartment, according to a new study by the real estate price estimation site Meilleurs Agents.

The average price of a Parisian apartment exceeds €10,000 per square meter and mortgage interest rates are expected to exceed 3% in 2023, which only worsens this inaccessibility.

The share of Parisians who cannot afford to buy has increased by 1.8% since the start of the year, and is expected to reach 84% in 2023.

“The rise in interest rates remains significant in the capital, while real estate purchasing power [the number of square metres a household can afford] is one of the lowest rates in France with 24m²”, specifies Meilleurs Agents.

Largely due to people’s inability to buy, properties are now spending more time on the market. Currently, a house would be sold after around 68 days on average, compared to 44 days in August 2020.

A Gard prefecture has ordered the demolition of a house, a swimming pool and a double garage built illegally in a restricted area.

A court ruled in 2019 that the development – located in the commune of Bernis, near Nîmes – was not permitted because it was in a natural area (green belt).

The court ordered the restoration of the land, but this was not carried out and the prefect of the department, Marie-Françoise Lecaillon, took matters into her own hands.

Demolition vehicles were sent to the site on October 20.

#Video Destruction of a structure #illegal located in the municipality of #Bernis in the #gard https://t.co/xay6gc3HQi pic.twitter.com/Hxm3znMIR3

The Gard has set up a committee to combat illegal construction responsible for raising the awareness of local residents and elected officials.

Further demolitions are planned for the coming months.

The French government may seek to extend the impending ban on renting properties with the lowest energy efficiency ratings to vacation rentals, which have so far been excluded.

This was announced by Minister Delegate for Housing Olivier Klein on BFMBusiness.

Under the Climate and Resilience Act, people who own properties that consume more than 450kWh per square meter per year – described as ‘Thermal colanders‘ in France, will no longer be able to rent them under long-term contracts.

So far, vacation rentals have not been included in the measures.

Mr Klein said he wanted to prevent owners of G- and F-rated properties from converting them into holiday rentals so they could continue to rent them.

“The owners of Thermal colanders cannot be allowed to hide. The rules will be the same for furnished and unfurnished properties,” he said.

Hanging laundry on balconies prohibited in another municipality

The inhabitants of Valbonne, a town near Nice (Alpes-Maritimes), no longer have the right to hang their laundry on their windows or balconies between 9 a.m. and 10 p.m.

The local authority says it made the decision to keep the historic city center clean.

People breaking the new rule risk a €35 fine. Residents have launched a petition against this decision.

Bans on hanging laundry from balconies and windows are not uncommon in France, with Béziers, Fontainebleau and other cities having already introduced such measures.

It is also generally forbidden to hang laundry inside the apartments. condominiums.

It’s time to sell and not buy a property in France, advise the majority of notaries

Paris sells French chateau and holiday village for just over €200,000