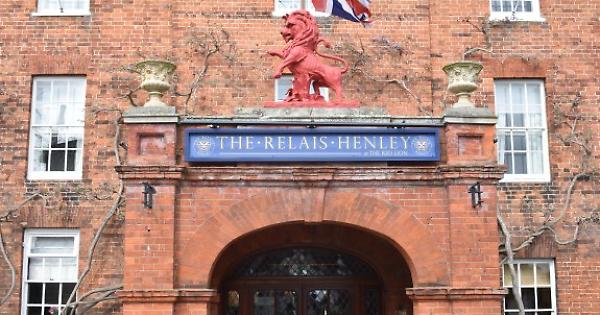 A historic Henley hotel has been granted planning permission for new signage more than six months after reopening under a new name.

The former Red Lion hotel in Hart Street, which is Grade II listed, has been renamed Relais Henley as part of a £3million investment.
refurbishment.

Signs bearing the original name were removed in December 2020 but after complaints to the Henley Standard the new co-owner Grace Leo agreed to revise the plans to preserve the traces of the building’s past.

The Relais now has a large sign on the main face of the porte cochere, the red brick covered structure at the main entrance to the hotel, and two small signs on either side in the same style bearing the inscription “Le Lion Red “.

Ms Leo applied for listed building permission and advertising permission for the signs in April last year, two months before the Relais opened.

Now South Oxfordshire District Council, the planning authority, has given the go-ahead. Planning officer Paul Bowers said: ‘The proposed signage would be similar in size to previous signage.

“A noticeable difference would be the color of the panels. However, the coloring is not objectionable and does not affect the visual amenity of the building.

The district council’s conservation officer had issued a holding objection, saying there was ‘insufficient justification’ for a hotel renaming and that the ‘Red Lion’ had ‘preserved itself for many centuries and through multiple changes of ownership and through many phases of renovation”. But in November the officer changed his mind, saying: “On the whole it is considered that the proposed to include a reference to the Red Lion in the new signage, while reducing the name to fine print, at least perpetuates the name enough that it would not completely disappear and could be reinstated later.

“Following the revised plans, showing the carved lettering with gold leaf lettering for the replacement signage on the porte-cochere, the signage is found to be acceptable.”

The Henley Archaeological and Historical Group had opposed the rebranding of the hotel.

He said: ‘The proposal to remove the historic name of this building and replace it with the French word ‘Relais’, designating any coaching inn in France, is very poorly conceived.

“We most strongly oppose this proposal as it would be detrimental to the historic interest of the building, to the setting of the adjacent significant historic buildings and to the very character of the conservation area at the very entrance to the historic town at the edge of River.”

The Henley Society, a conservation group, also objected, saying the Red Lion should be on signage.

Ms Leo, an international hotelier who bought the premises of MG Hotels with shipping company chief Tim Hartnoll, said the new name was needed to set the business apart from more than 600 other Red Lions in Great Britain online. Britain, as commerce increasingly came from internet searches.

The Red Lion at Henley has been around for nearly 500 years and previous guests include Charles I, Prince Rupert, Samuel Johnson, George III and George IV. Oliver Cromwell is also said to have stayed there.

• What do you think? Write to: Letters, Henley StandardCaxton House, 1 Station Road, Henley or by email
@henleystandard.co.uk