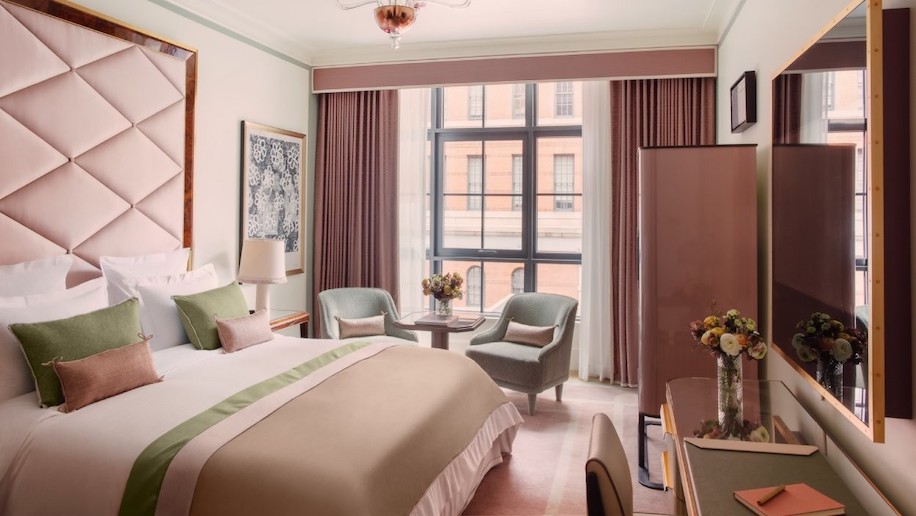 The French family group Barrière has opened its first hotel in the United States, with an address in the Tribeca district of New York.

The 97-room Hotel Barrière Fouquet’s New York is located at 456 Greenwich Street and features Art Deco-inspired interiors by Martin Brudnizki. The lavender-centric design blends “the modern industrialism of Tribeca and the sleek classism of Paris.”

The hotel has 97 rooms and suites, including a large two-story presidential suite on the 7th and 8th floors of the hotel. Rooms and suites include Art Deco-inspired furniture, quilted headboards, European-style chandeliers, and bespoke toile de jouy wallpaper designed by Schumacher Hospitality.

The property’s restaurants include an outpost of famed French brasserie Fouquet’s, with a menu curated by chef Pierre Gagnaire, signature red decor, and celebrity portraits taken by Harcourt Studio displayed on its walls.

The ground floor is home to the Par Ici vegetarian café-restaurant, which features rattan bistro chairs, potted palms and café-style tables, as well as a menu featuring fresh, seasonal and organic ingredients. .

Finally, the Titsou hotel bar is located between the Fouquet’s restaurant and the reception and bears the name of the nickname given to the founder of the hotel group Lucien Barrière by his daughter. Hidden behind a bookcase door, the interiors of the speakeasy-style bar feature warm decor, dim lighting, rich curtains on the windows, and tented ceilings.

The hotel also has a spa with treatments from the French brand Biologique Recherche, a fitness center from the gym brand Dogpound, a projection room in the basement which can be used for film previews and private events, and two large meeting rooms that can be combined to create a banquet hall.

Dominique Desseigne, CEO of Groupe Barrière, commented on the opening:

“The opening of Hôtel Barrière Fouquet’s New York is a great success for Groupe Barrière and our teams.

“I am proud to see our iconic and iconic brand Fouquet’s cross the Atlantic and I look forward to continuing to share our French way of life.

The hotel is a joint venture between Groupe Barrière and Caspi Development.