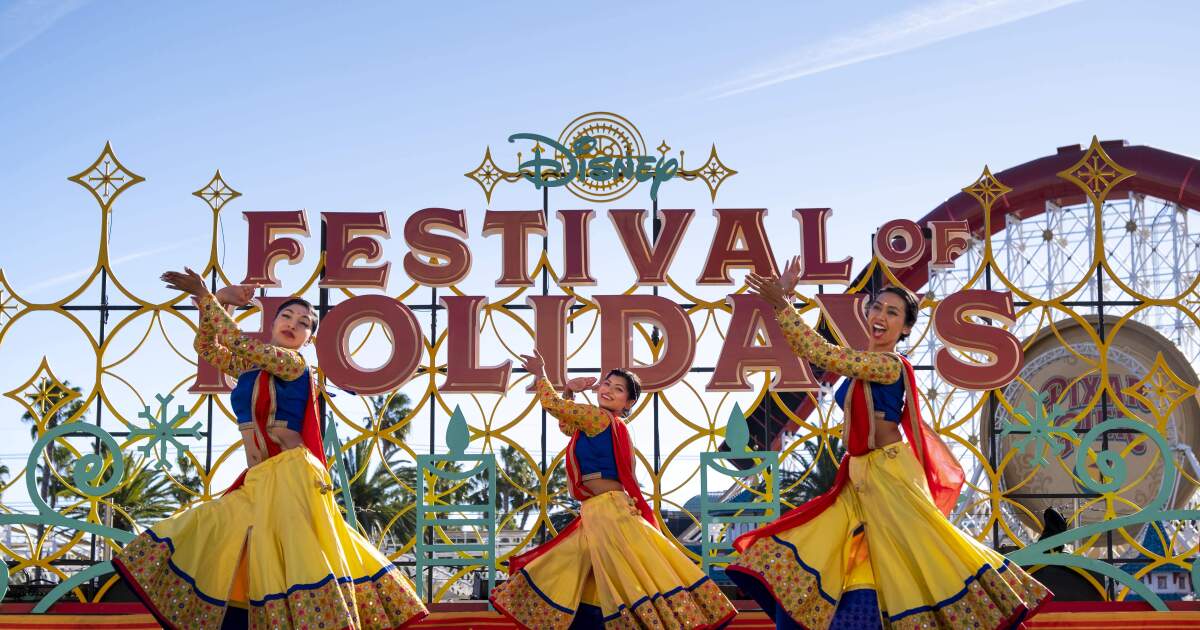 Since opening Disneyland Park in Anaheim in 1955, The Walt Disney Co. has opened 11 other theme parks around the world, including in France, Japan, Hong Kong and China.

Over the past 66 years, the company has grown from a nostalgic, American-inspired cinematic company and destination to the 1st entertainment brand in the world. So when it comes to hosting the annual theme park holiday celebration — which kicked off Nov. 11 at Disneyland and Disney California Adventure parks in Anaheim — Disney is now paying homage to a diversity of cultural traditions.

Until January 8, visitors can now experience music, dancing, shows, parades, food, drink and merchandise associated with Christmas; the Mexican-Spanish celebration of Navidad; the eight-day Jewish festival of Hanukkah; the African-American tradition of Kwanzaa; the Indian festival of lights known as Diwali; and the Latin American tradition of the Day of the Three Kings. And that’s not all. At the end of January, Disneyland Resort will host its annual Lunar New Year festival celebrating Chinese, Vietnamese and Korean traditions.

Here’s a look at the various events taking place at the two Southern California theme parks this holiday season.

At Disney California Adventure, the World of Color Season of Light Water, Light, Music and Projection Show at the Pixar Pier Pond takes place at 9:15 p.m. and 10:15 p.m. nightly. And throughout the day in the Paradise Gardens area of ​​the park, the celebration of Viva Navidad continues, with live mariachi music and folk ballet dances, arts and crafts stations and meet-and-greet sessions with the Colombian character Mirabel from the animated film “Encanto”. Santa also set up his workshop at DCA’s Redwood Creek Challenge Trail.

DCA also organizes live music and dancing daily with a diverse lineup of acts. Performers include the Grammy-winning Mariachi Divas; salsa-cumbia-Latin rock band Tina and the Sounds of Celebration; a cappella R&B ensemble The Mistletoes, which will perform Christmas and Kwanzaa music; the Mostly Kosher klezmer-jazz ensemble; the Indian dance group Blue13 and the big band Phat Cat Swinger.

The popular Festive Food Market The food stall experience at Disney California Adventure is back through Jan. 8, with nine stalls along the park’s main walkway serving holiday treats and international food and drink. Park visitors can purchase the items a la carte or purchase a Sip and Savor Pass that includes eight plastic tickets for their choice of festival items at kiosks or participating restaurants throughout the park.

With dozens of items to choose from, we polled park staff and food bloggers who previewed the food earlier this month for their favorite dishes, new and old.

While the Festive Foods Marketplace is only at Disney California Adventure, Disneyland has also introduced dozens of new holiday food items, baked goods and refrigerated desserts that will be served through January 8. The best place to find a wide selection of holiday items is the Jolly Holiday Bakery Café on Main Street.

Although Disney’s new Marvel movie “Black Panther: Wakanda Forever” has nothing to do with the Christmas holidays, it opened in theaters on November 11. A Wakanda-themed celebration kicked off on the same day as Disney’s Avengers Campus holiday festivities. from Disney California Adventure.

The new Black Panther warrior character appears daily in the Avengers campus. For a limited time, the warrior will lead a nighttime procession at 5:30 p.m. from the Avengers headquarters building to the new Black Panther Celebration Garden next to the Guardians of the Galaxy – Mission: BREAKOUT! stroll. The garden features festive evening lighting, a Wakanda-themed mural, and a giant photo spot with a Black Panther mask.

Nearby, in the Hollywood Backlot next to the super Avengers merchandise store, there’s a new Flavors of Wakanda food stand. It serves African and African American-inspired dishes, including peri-peri chicken, maafe (peanut stew with black-eyed peas and sweet potatoes), and a butterfly pea tea lemonade drink called Dawa. . An alcoholic version of Dawa is also available. Meanwhile, the Shawarma Palace stand in the Avengers campus has expanded its menu with a Wakandan roast pork wrap sandwich with black garlic sauce and chermoula.

Park visitors arriving for the holidays can now purchase a new device that was rolled out to Disney parks on October 26. The MagicBand+ is an Apple Watch-style accessory that syncs with the Disneyland app on your cellphone.

The MagicBand+ enables hands-free entry to the park (if your admission tickets have been scanned into the app), check-in at the Lightning Lane entrance, and connection to Disney PhotoPass images. It also ties into additional immersive storytelling features digitally dotted throughout the park. The wristband also features haptic sensors that provide pulsations, vibrations, and lights during nighttime shows, including “World of Color” and “Fantasmic.” The MagicBand+ can be purchased at resort locations starting at $35 and is available in adult and children’s wristband sizes.

Single-park day tickets until January 8: $144 to $179 (limited quantities). Park-hopper tickets (to visit both parks in one day) cost an additional $65

2022-11-23
Previous Post: Chef Jonathan Benno opens Harta at the Grayson Hotel in Bryant Park
Next Post: Dronisos targets the US market after an exciting year