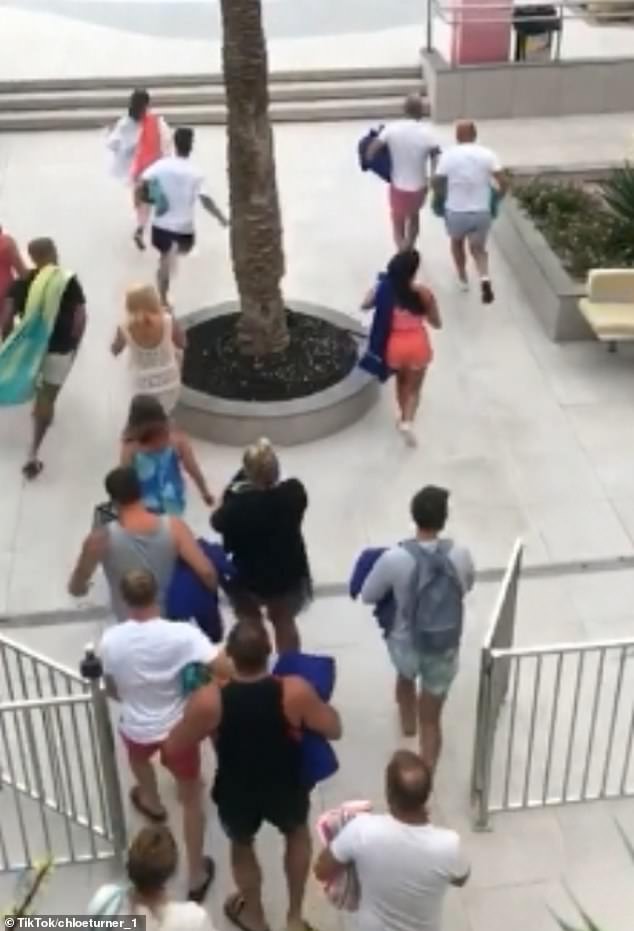 At first the morning, crowds of tourists were vying for deckchairs at a hotel in Tenerife.

The video shows crowds of anxious visitors lining up next to their resort’s pools and rushing to claim the top spots as soon as possible.

Armed with swimsuits and sunscreen, British tourists sprinted past other holidaymakers in a sad effort to claim a place in the sun for the day.

Some are said to have queued for 90 minutes at dawn, waiting for an unidentified signal before charging through rival holidaymakers in search of the precious sunbeds.

In Spanish resorts, it is customary to assume that a towel left on a deckchair belongs to its owner for the duration of the day. Although the origin of this ruler is unknown, it is often believed to have originated in Germany.

While not all hotels have this policy, when they do, it can lead to tense rivalry between tourists eager to have a better time than their neighbors.

A watcher at the four-star Spring Hotel Bitacora in Playa de las Américas captured the poolside storm and uploaded it to TikTok.

According to The Sun, the caption of Chloe Turner’s initial video read: “So I’m in Tenerife and everyone is scrambling to find their sunbed spot.”

In her second, she said, “Another day, another conflict over the deck chairs”, as competing groups advanced from all sides to take their position.

As visitors return to sunny spots amid record temperatures, the battle for deckchairs has been a regular sight across Europe this summer.

As temperatures soared around the world, Spain experienced its hottest July in 60 years while France is currently experiencing its fourth heat wave of the year.

Spain, which has been plagued by raging flames over the summer, saw temperatures as high as 37C at 7am.