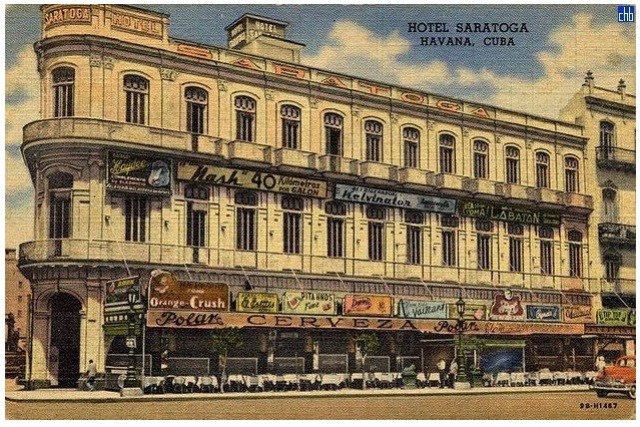 Hotel Saratoga was built in the 1870s, financed by wealthy Havana landowner and native of Santander, Spain, Gregorio Palacios. The building was planned to house tobacco warehouses on the ground floor, stores and access corridors to the four residential apartments on the 2nd floor. The hotel of this name would be installed on the 3rd floor, with 43 rooms and a dining room.

Located at the start of Calle Monte, it was later moved in 1933 to its present base on Calle du Prado, or Paseo de Marti, at the corner of Calle des Dragones, with its main entrance on the Prado, opposite from La India or the Noble Havana fountain. , just 60 meters from Capitolio.

The Saratoga Hotel has been listed in tourist guides as one of Havana’s top attractions since 1935. Havana society gathered in its canopy to everyone’s delight, and the country’s hit bands played there. It is important to note that Las Anacaonas, the first all-female orchestra, started there.

The hotel was still open, with brief periods of closure, until the 1980s when a medium-sized fire broke out and the resulting damage forced it to close permanently.

After extensive renovations, with only the facade kept as close to the original as possible, the hotel reopened to international tourism in 2005. The centrally located, brand new hotel had 96 rooms, three bars, two restaurants , swimming pool, conference room and other facilities.

With a facade reminiscent of the colonial era and an eclectic architectural style full of fine Cuban marble and French millwork, the hotel has been awarded 5 stars. In recent years, celebrities as big as Madonna, Beyonce and even an Arab sheikh with his entourage have walked through its luxurious and expensive facilities.

Things were progressing peacefully on this morning of Friday May 6th and the works did not stop inside the hotel, preparing its reopening on the 15th of this month, after having been closed for two years due to the coronavirus pandemic. COVID-19 which has brought the world to a standstill.

The clock read 10:56 a.m. when an explosion rocked much of Havana. The epicenter was the 2nd floor of the Saratoga Hotel, and the effects of the explosion were felt more than 1 km away, shattering storefronts and storefronts more than 250 m away.

A cloud of dust enveloped the surrounding streets. Screams, terror and fear gripped passers-by. Neighbors were the first responders on the scene, putting their lives on the line to offer their hands amidst this cloud of smoke to save the injured with none other than themselves. Adrian Salazar Peña and Oscarito Rodrigues (the figaro), are an example of this, the latter, without any authority, having to guide and organize the police officers who arrived on the scene.

Police from the station just 70 meters away were unable to figure out what was going on at first and were therefore not very quick to rescue those affected or contain the public. The nearest firefighters, with their station just two and a half blocks from the disaster, appeared on the scene 20 minutes after the explosion.

The hotel was almost completely destroyed and almost nothing of its old facade survived. The nearby school was badly damaged. The emblematic Marti Theater, just 50 meters away, has lost its beautiful grille, as well as the doors and other outdoor facilities. The block where the hotel is located was badly damaged, with the nearby building on Prado Street flattened by the blast. On Calle Dragones, the building next door was completely destroyed and buried in rubble. El Calvario Baptist Church, located on Calle Dragones, also suffered serious structural damage, with the collapse of different parts of its facilities, such as the auditorium.

The buildings on the back street did not go out lighter and were badly damaged by the large explosion, with one collapsing to the ground and the other collapsing partially, due to the danger they posed.

The largest explosion in Havana after the La Coubre explosion (1960) resulted in the loss of millions of pesos for the national economy, the forced displacement of families, the destruction of heritage, 22 injured and the significant number of 47 dead.

Just two hours after the disaster, Cuban President Miguel Diaz-Canel Bermudez appeared on the scene and an experienced expert concluded that the cause of the explosion was an accident as gas was transferred to the reserve tank of the hotel. It goes without saying that the words of Miguel Diaz-Canel became the official version of events and remain the same today.

The many unanswered questions

Four months after the explosion, many questions remain unanswered in the minds of those affected and other citizens who want to know the truth:

How were they able to discover the cause of the explosion just two hours after it happened, when rescue teams had still not entered the building and rescue efforts had not yet started ?

Why were they so quick to close the case?

Will technical expertise one day be delivered on the causes of the explosion, assessed by experts?

If it was indeed a gas explosion, why did this accident occur and what measures were taken to prevent it from happening again?

Can there be a gas explosion of this magnitude without fire, soot or the smell of gas?

If the gas was not the cause of the disaster, what was and who is/are responsible?

What will happen to those affected, who now live in a hotel on the outskirts of town?

Will the families of those who perished in the disaster be compensated, as well as those affected who see their lives torn from their communities?

Is there more information than what we already know?

These are some of the questions that eat away at the minds of victims and neighbors. Given the government’s silence on the subject, we have no choice but to find our own answers. Neighbors who say they smelled gunpowder or explosives, question the official version of events and create or repeat theories, which could be called conspiracy theories because there is no evidence.

The Cuban people expect and deserve answers, the government owes them.